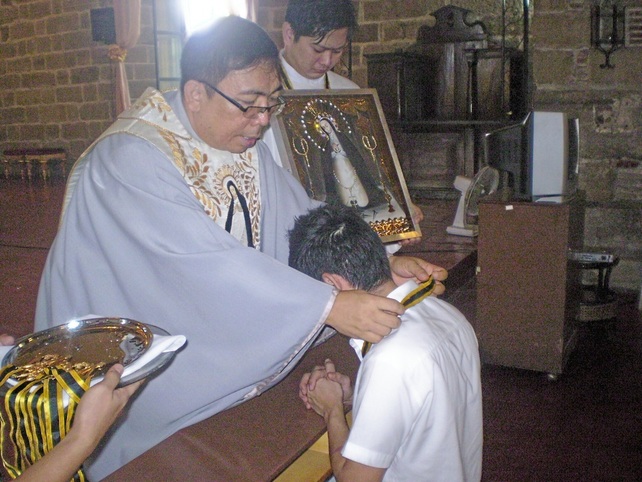 The members shall have the following rights and privileges:

A.   To be informed of the meetings called upon by the president or other officers upon the direction of the president, and to attend the same;

B.   To attend, express opinions, give suggestions and exercise his right to vote regarding the agenda of the meetings;

C.   To nominate, to vote, to be elected, and to be appointed in any official position in the Cofradia provided he has complied with the requirements set therefore by the officers/ Committee on Elections;

D.   To be informed of any project or activity of the organization, and participate in such undertakings;

E.   To use the facilities of the organization in relation to its objectives;

F.    To bear the Cofradia’s insignia in all church gatherings especially during processions and other religious functions and represent the organization, if duly directed;

G.   To enjoy any and all rights and privileges as a Member including Apostolic and Episcopal Blessings and Indulgences granted by the Roman Catholic Church.

H.   In case of illness, to ask for the assistance of the Confraternity, both spiritually and financially.

I.      In fulfilling the Pledge each member makes,

1.  You know you are fulfilling Our Lady’s conditions to obtain the conversion and the peace of Christ for the world.
2. You become Our Lady’s child-servant, obediently fulfilling Her requests and is totally consecrated to Her in this lifetime and in the next.
3. You obtain numerous indulgences through the Rosary and the Scapular.
4. You become eligible for the spiritual graces of Our Lady that She has promised to all devotees of Her rosary, tears and sorrows. Graces in this life, at the hour of death, and after death.
5. You share in the prayers of members.
6. You participate in the New Evangelization proposed by the Holy Father.

The members shall have the following duties and obligations:

A.   To make a Pledge, mainly to:
1.    Offer up everyday the sacrifices demanded by daily duty;
2.   Pray at least five decades of the Rosary daily while meditating on the Mysteries;
3. Wear the Cofradia Medal on specified occasions of the Organization and the Scapular of Our Lady everyday as profession of this promise and as an act of consecration to theBlessed Mother;
4.  Accomplish the devotion of the Five First Saturdays of the month, by Praying at least five decades of the Rosary, confessing and receiving Holy Communion including the fifteen-minute meditation on the Mysteries of the Rosary, and on the seven sorrows of the Blessed Virgin Mary and renew these promises often, especially in moments of temptation;
5.   Accomplish the devotion to the Most sorrowful Virgin by praying constantly the Rosary of Our Lady of Sorrows and meditating on Her Seven Sorrows as often as possible and offer such for the intentions of the members and the whole organization as well.

B.   To attend all meetings called upon by the president or other officers/members upon the direction of the President or upon authority as prescribed in Article XIII Section 2 of this Constitution and by-laws;

D.   To abide by the provisions of the Cofradia’s constitution, by-laws, rules and regulations that may be promulgated by its officers and/or spiritual director;

F.    To contribute a one-time lifetime membership fee, an annual/monthly membership fee, offer voluntary contributions and/or pledges, or any amount for the fulfillment of the organization’s objectives;

H.   To be actively involved in the propagation of the devotion to our Blessed Mother of Solitude by actively attending and participating in all official activities and functions of the organization (e.g. attend the funeral of a deceased member of the Cofradia);

I.    To comply with all requirements set by the officers and/or spiritual director; and to comply with the objectives of the Cofradia and with all that is prescribed in the statutes as well as decisions of the general meeting;

J.    Members in spreading the devotion to the Soledad, shall be united with the Holy Father, and the bishops in union with him. When acting in the name of the Cofradia, they must keep within the terms and the authorized practices of the Organization.

K.   To lead an upright Christian life and strive to be an exemplar in his/her community by attending an annual Spiritual Exercise, Formation or Retreat sponsored by the Cofradia.

L.    Assist in the ministry of the Cofradia by knowing how to console, comfort and sympathize with people who are in a state of sorrow, bereavement and solitude so that the members may fully comprehend not only the pain and the sorrow that Our Lady experienced when she lost Her Son, our Lord Jesus Christ, but also Her Fiat, her submission to the will of God.

M.   To honor the following dates even in a private and personal manner (if incapacitated or unable to participate due to emergency reasons in the scheduled activities of the Cofradia for said date):