History of the Parish of San Roque 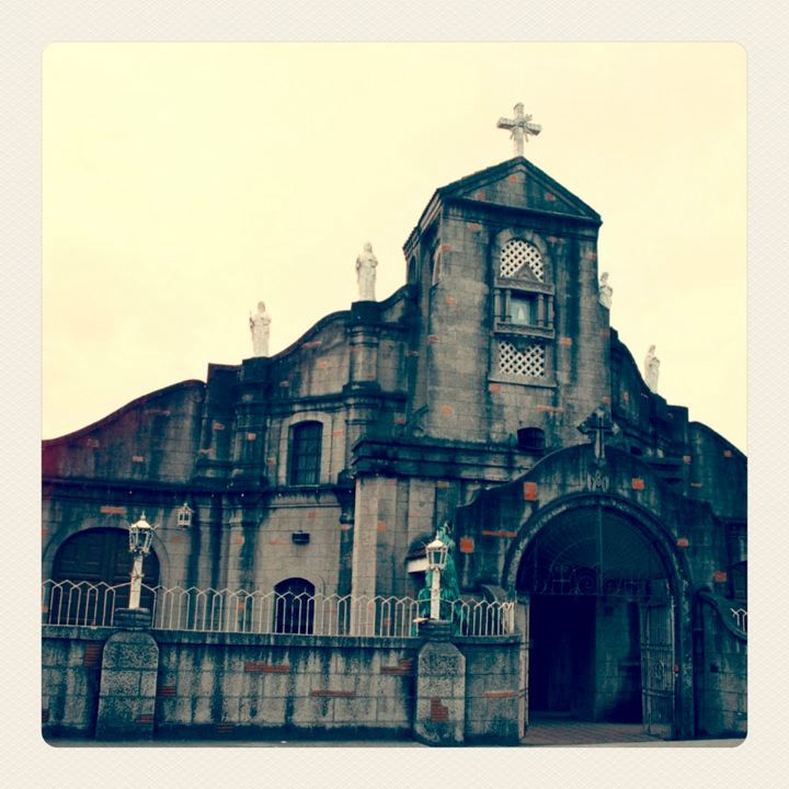 The OLD church of San Roque, Cavite city. Photo courtesy of Ige Ramos.
San Roque lies at the southern part of what was once known as the walled city of Cavite.  When the Spaniards came in 1571, they found the place forested and swampy.  Its location was very strategic for
trade since it was surrounded by water. This must be the reason why many Chinese used to visit the place.  In 1573, when the Chinese pirate Limahong was being chased by the Spaniards, he retreated to the northern most portion of San Roque.  This is presently known as Sangley point. In 1614, when the province of Cavite was given a politico-military government, San Roque was created as an independent “pueblo”.

A legend tells us that sometime in 1700, a badly damaged ship stopped at a certain place in Cavite called Sapa-sapaan for repair.  Aboard the ship was the image of San Roque which the crewmen venerated as their patron.  It was customary then to have saints as protectors of the ship while it was on a voyage.  Before the work began, the captain of the ship ordered that the image of San Roque be deposited in the nipa chapel of the town.  At the time, the patroness of the town was Sta. Margarita. After the ship had been repaired, the captain asked the workers to bring back the image to the ship.  To their surprise, the crewmen found out that they could not move the image even an inch from its place.  They informed the captain of their strange experience.  Thus, they left the image in the chapel.  The news spread around the town and from that time on, San Roque was venerated as the patron of the place.  The town was renamed after him.

According to Don Gervacio Pangilinan, a local historian, an old legend tells us that a grand temple was built in 1725.  Together with San Roque, the miraculous image of the Nuestro Padre Jesus Nazareno was also venerated.  The honorable Baron of Melvill financed the construction of the Church.  Today, the thick walls of the nave of San Roque reminds us of the one built during the early years of the century. 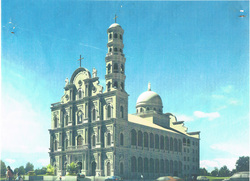 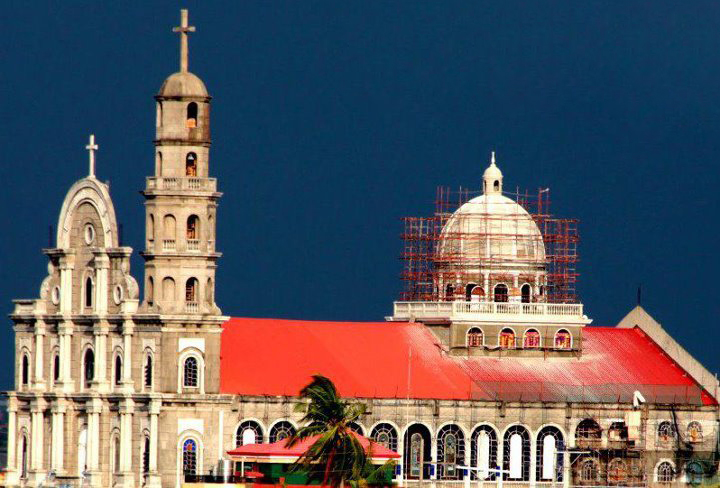 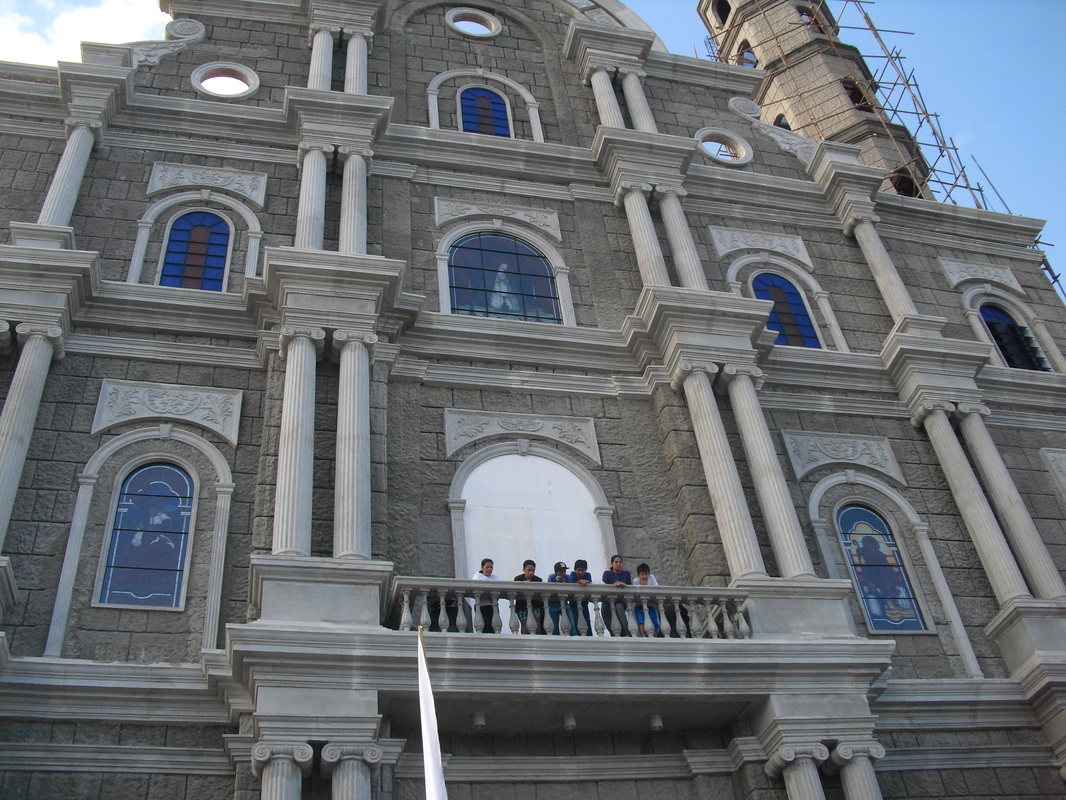 The NEW Church of San Roque. Shrine of Nuestra Senora de la Soledad de Porta Vaga.
BIOGRAPHY
St. Roch was born at Montpellier France. His father was a governor of that city. At his birth St. Roch is said to have been found miraculously marked on the breast with a red cross. When he was twenty years old, his parents were killed. Although left with their fortune and the government of Montpellier, he renounced his riches giving all the money to the poor. He handed over the governmental duties to an uncle. He felt an inner calling to proceed toward Italy. Disguise as a mendicant pilgrim, he set out on foot. Along the way, he encountered village after village stricken by the plague. Knowing then what his inner calling was about he began travelling from village to village staying in each for weeks at a time devoting himself to the plague-stricken and curing them with the healing power in his hands. He never feared for his own health or safety but lay his hands upon all he met and they were healed. He healed ailing cattle and other animals as well.


SAVED BY THE MINISTRATIONS OF A DOG
After a few years he himself was stricken with the plague.  Not wanting to be a burden on society he withdrew to a wooded area outside of a  village called Peacenza and waited for death to overtake him. As he lay at the  brink of death a dog appeared and lay down beside him licking his wounds. The  dog would periodically disappear and return with a morsel of food that he had  collected from near by Peacenza. Although the dog was himself thin from  starvation, he always lay the food gently on St. Rock's chest for him to eat.  St. Rock soon recovered and was found by the dogs master who took him to a place  of shelter. St. Roch then resumed healing the people in the plague stricken  villages.

Returning to his home in Montpellier, St. Roch, still wearing his pilgrim clothing and physically changed because of his ordeal was  thrown into jail by his own uncle where a few years later he died. After his  death the cross on his chest that had been their since childhood and some documents found in his possession served to identify him. He was given a public funeral and the miracles continued long after his death. 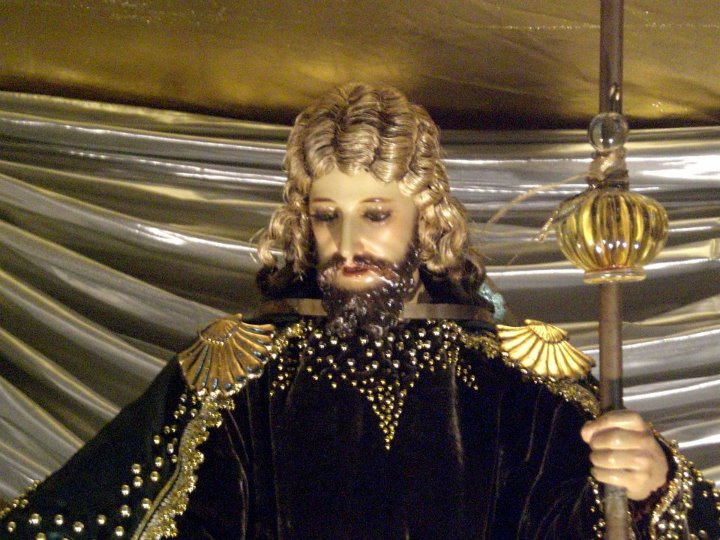