MIRACLES OF THE VIRGIN

Faith is strengthened  and then solidified by the most trying events in life.  These may be crucial tests of endurance, of survival, trying moments that hover between life and death.  To most of us, these are crossroads that mark our passage from one stage to another, or doors that open new opportunities for us.  We are tested as human beings and the dawn of realization delivers us as changed individuals.  We are baptized in the spirit, so to speak, by occurrences which our mortal grasps are unable to explain, by “miracles”which generations before us were unable to fathom, and probably generations after us shall unceasingly ponder on and on.

Countless miracles have been attributed to the Virgen de la Soledad.  Her mysterious apparition and the unexplained arrival of Her image were initial revelations of her miraculous reign.

She is also known as the "Virgin of a Thousand Miracles" because of many miracles granted to the faithful devotees from the day of its discovery to the present.  Among the notable miracles attributed to her intercession are the following famous stories: 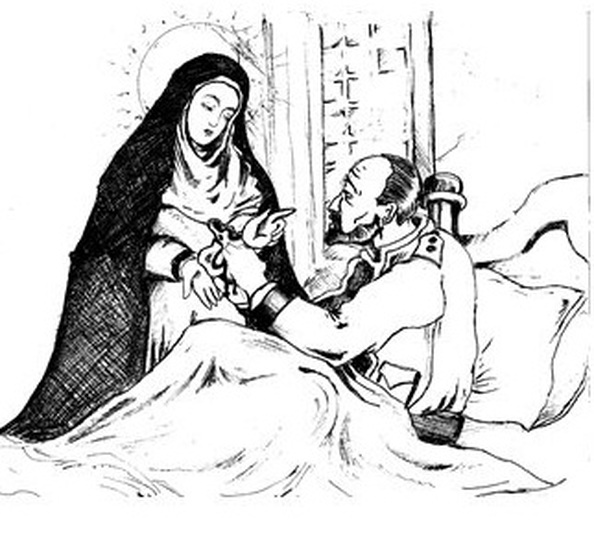 In 1882, a terrible cholera epidemic spread in Cavite Puerto.It was said that Caviteños died by the hundreds and the streets had been a scene of daily funeral processions. The Spanish politico-military governor of Cavite, Don Juan Salcedo Y Mantilla de los Rios, ordered the spraying and burning of gunpowders on the streets so that the fire and the smoke they produce might drive away the virus of the disease.By mid-October, the epidemic was placed under control.

During this epidemic, the Governor himself fell ill.One afternoon, as he was about to take his siesta, he ordered his soldiers not to admit any visitor.After some time, he heard a persistent knock at the door.  To his surprise, he found an old woman dressed in black. After the customary greetings, she asked him to give orders that the fiesta of Cavite be celebrated with the greatest pomp possible.

The Governor, eager to send the intruder away, agreed to the request. Then, the unwanted visitor left.The Governor, filled with fury at his soldiers, reprimanded them for admitting the old lady. The guards replied that they had not allowed anyone to enter the house. Then the Governor remembered the request. He realized that it must be the Virgin Herself who appeared to him.He also realized that after talking to the woman, the fever had left him.

All these miracles were depicted on large canvasses painted by Don Roman Faustino, Cavite’s most celebrated painter and pupil of  Juan Luna,.These paintings were complete with the details and the respective dates of the miracles. Once, they were hanged on the walls of the Ermita. Everything perished during the last world war as if to signify that these miracles do not belong to the physical realm of life. More important perhaps than these human attempts to share with the future is the message of Cavite’s Patroness to Her fold: “I am thy Mother. Honor me. I shall always be with you all.”

There have been other miracles attributed to the Virgin with the passing of the years including present day accounts of healings, families reunited and family problems solved.
Managed and operated by the Cofradia de la Virgen de la Soledad de Porta Vaga, Inc. with head office at 506 Plaridel St., San Roque, Cavite city.