Brief History of the Province of Cavite
http://www.cavite.gov.ph

Colonizers arriving in the late 16th century saw an unusual tongue of land thrust into Manila Bay and saw its value as the main staging ground from where they could launch their bulky galleons. Formed in the shape of a hook, which in Tagalog is called kawit , it became the most important port linking the colony to the outside world.

What is now Cavite City was once a mooring place for Chinese junks trading that came to trade with the settlements around Manila Bay. In 1571, Spanish colonizers founded the port and city of Cavite and fortified the settlement as a first line of defense for the city of Manila. Galleons were built and fitted at the port and many Chinese merchants settled in the communities of Bacoor and Kawit, opposite the Spanish city to trade silks, porcelain and other Oriental goods. The vibrant mix of traders, Spanish seamen and local residents gave rise to the use of pidgin Spanish called chabacano.

In 1614, the politico-military jurisdiction of Cavite was established covering all the present territory except for the town of Maragondon, which used to belong to the corregimiento of Mariveles. Maragondon was ceded to Cavite in 1754. Within Maragondon was a settlement established in 1663 for Christian exiles from Ternate, Mollucas.

Owing to its military importance, Cavite was attacked by foreigners in their quest to conquer Manila and the Philippines. The Dutch made a surprise attack on the city in 1647, founding the port incessantly, but were repulsed. In 1672, the British occupied the port during their two-year interregnum in the Philippines. American forces attacked the Spanish squadron in Cavite. The Spanish defeat marked the end of Spanish rule in the country.

Missionary orders acquired and enlarged vast haciendas in Cavite during the 18th and 19th century. These haciendas became the source of bitter agrarian conflicts between the friar orders and Filipino farmers and pushed a number of Cavitenos to live as outlaws. This opposition to the friar orders was an important factor that drove many Cavite residents to support reform, and later, independence.

In 1872, a mutiny by disgruntled navy men in Cavite led to a large-scale crackdown on reformers and liberals. Three Filipino priests – Jose Burgos, Mariano Gomez and Jacinto Zamora- were executed and dozens others sent into exile. In 1896, after the outbreak of the Philippine Revolution, Cavite took center stage as thousands of Katipuneros liberated most of the province's towns.

On August 26, 1896, when the Philippine revolution against Spain broke out, Cavite became a bloody theatre war. Led by Emilio Aguinaldo, Cavitenos made surprise attacks on the Spanish headquarters and soon liberated the whole province.

Emilio Aguinaldo, the first Philippine president came from the town of Kawit and directed the conduct of the Revolution from his base in the province. He agreed to go into exile in December 1897, but returned to the Philippines in May 1898. On June 12, he declared Philippine independence from the balcony of his home in Kawit.

The Americans established civil government in the province in 1901. The naval station in Sangley Point became the chief American naval base in the country.

The Japanese targeted the naval base during the first wave of attacks on military installations in the Philippines.

Cavite and its people, what they are today, and what will be tomorrow will remain their infinity, as a place with a glorious history, and a people fortified with strength to live and die for a worthy cause. 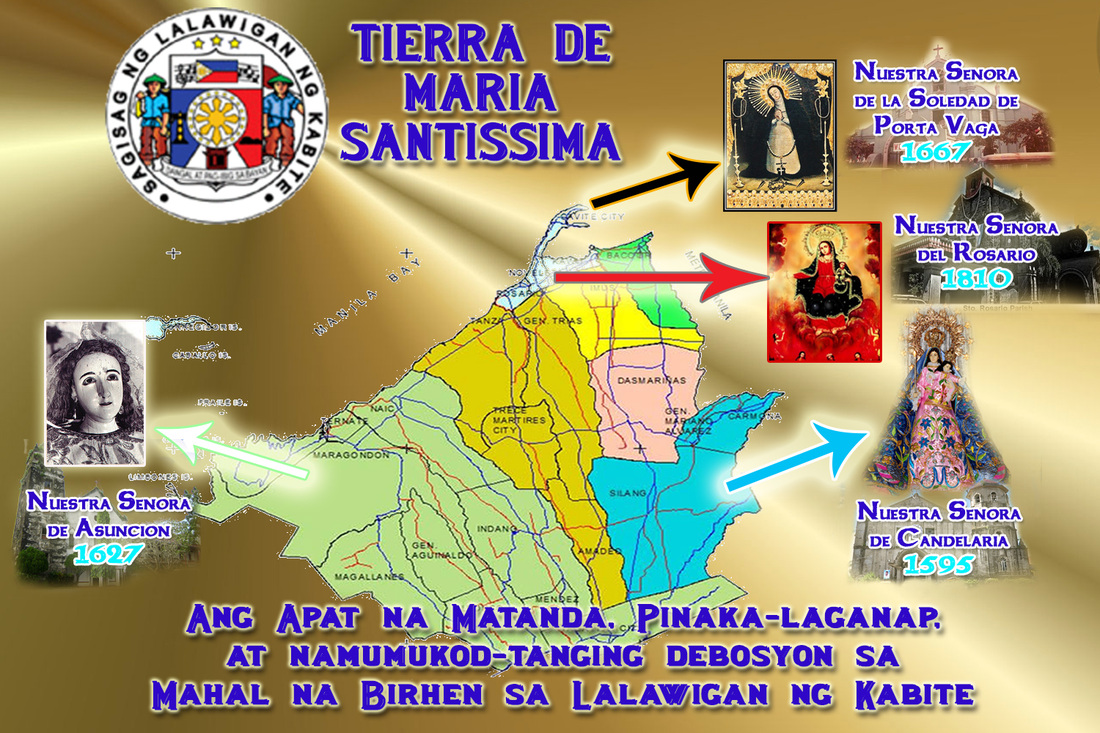 History of the Provincial Government of Cavite

The provincial government of Cavite has a colorful history. During the greater part of the Spanish regime the provincial administration was handled by the alcalde mayor who was the representative of the governor and captain general in Manila. As alter ego of the Chief executive of the country, the alcalde mayor exercised over all executive, judicial, and legislative functions within his jurisdiction. He was in fact a petty captain general because he held under his orders the armed forces of the province for purposes of defense and maintenance of peace and order. By the Decree of June 25, 1847 the title of alcalde mayor in Cavite was changed to politico-military governor. He was also tripped of judicial functions.

The last Spanish politico-military governor of Cavite, with headquarters in the cabecera of Cavite (now Cavite City), was Col. Fernando Pargas whom Emilio Aguinaldo, as captain municipal of Cavite el Viejo (now Kawit), saw on the morning of August 31, 1896 to ask for a detachment of soldiers to protect his town from bandits. Aguinaldo’s plan was to ambush the government troops on their way to Kawit and seize their arms which his Magdalo followers needed urgently to start the armed uprising against Spain.

While waiting for his turn to talk to Pargas in his office, Aguinaldo learned that only one company of soldiers was left in Cavite as all available infantry men had been sent to Manila upon urgent summons from Governor and Captain General Ramon Blanco, who had placed eight Luzon provinces (Manila, Bulacan, Pampanga, Tarlac, Nueva Ecija, Laguna, Batangas and Cavite) under martial law following the discovery of the Katipunan secret society.

With this valuable information, Aguinaldo returned posthaste to Kawit and with the help of two councilmen, Candido Tria Tirona and Santiago Daño, led the assault and capture of the town’s tribunal (municipal building). Earlier that day the towns of San Francisco de Malabon (now General Trias) and Noveleta had risen in arms and taken over the control of the local government. It was this cry of Cavite on August 31, 1896, that signaled the beginning of the revolution. This soon spilled over to nearby provinces until it engulfed the entire country.

The Commonwealth regime lasted from 1935 to 1946. It was interrupted by the Pacific war and the subsequent Japanese occupation of the country. Three governors served during the first phase: Ramon Samonte (1935-1939); Emilio P. Virata, acting governor (1939), and Luis Y. Ferrer, Jr. (1940-1944). Ferrer was succeeded by Mariano N. Castañeda from May to November 1944.

The Japanese-sponsored Second Republic under Dr. Jose P. Laurel was proclaimed in October 1943. Dominador M. Camerino was appointed governor from December 1944 to the early part of February 1945. On February 13, Castañeda was recalled as governor by the commander of the advancing Allied forces.

The Commonwealth government was re-established towards the end of February 1945 with Rafael F. Trias as the governor. He served for only a few months after he was succeeded by Francisco T. Arca.

The Third republic was established on July 4, 1946 by virtue of the Tydings-McDuffie Act. Manuel Roxas, the last elected president of the commonwealth, continued as president of the Third Republic. During that time, Dominador Camerino was appointed governor. During the end of his term, Mariano B. Villanueva and Horacio Rodriguez took turn of Camerino’s position.

Camerino was elected governor in 1952, but again toward the latter part of his term, he was replaced by Dominador Mangubat who acted as governor from 1954 to 1955. Mangubat was followed by Delfin Montano who was elected governor for four consecutive terms (1956 to 1971). Lino D. Bocalan succeeded him in 1972. He was replaced by Dominador M. Camerino who served as acting governor from October 1, 1972 until his death on July 24, 1979.

It was Juanito R. Remulla who was appointed as acting governor on September 25, 1979. Under the Third Republic, he was elected governor on January 30, 1980. President Marcos proclaimed the Fourth Republic in 1981 and still, Remulla was in his service as governor until February 19, 1986. Fernando C. Campos succeeded him in 1986 to 1987. Remulla was reelected for a long term (1987-1995). He was succeeded by Epimaco A. Velasco  from 1995 to January 1998 and when he was given a position as Secretary of the Department of the Interior and Local Government (DILG), Ramon “Bong” Revilla, Jr. was appointed in place of him. Bong Revilla served from February 2, 1998 to 2001. He was then replaced by Erineo “Ayong” S. Maliksi in 2001. Maliksi served for three consecutive terms (2001 – 2010).

Gov. Juanito Victor “Jonvic” C. Remulla took his oath as the new governor of Cavite last June 26, 2010 at Holy Cross Parish in Tanza, Cavite.  During the turn-over ceremony last June 30, 2010 held at the Provincial Building’s Ceremonial Hall, Gov. Remulla vows to continue the programs of the last administration and promise to prioritize public service to the Caviteños.