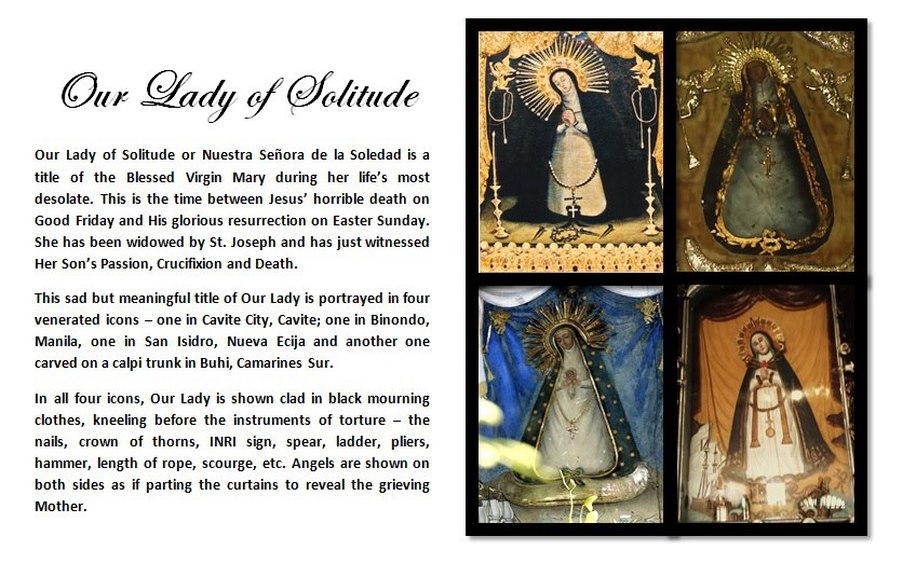 Our Lady of Solitude or Nuestra Señora de la Soledad is a title of the Blessed Virgin Mary during Her life’s most desolate period.  This is the time between Jesus’ horrible death on Good Friday and His glorious resurrection on Easter Sunday.  She has been widowed by St. Joseph and has just witnessed Her Son’s Passion, Crucifixion and death.

This sad but meaningful title of Our Lady is portrayed in three venerated icons --- one in Cavite city, Province of Cavite; one in Binondo, manila and another in San Isidro, Nueva Ecija.

In all three icons, Our Lady is shown clad in black mourning clothes, kneeling before the instruments of torture-the nails, crown of thorns, INRI, sign, spear, ladder, pliers, hammer,  rope, scourge, etc. Angels are shown on both sides as if parting the curtains to reaveal the grieving Mother.* 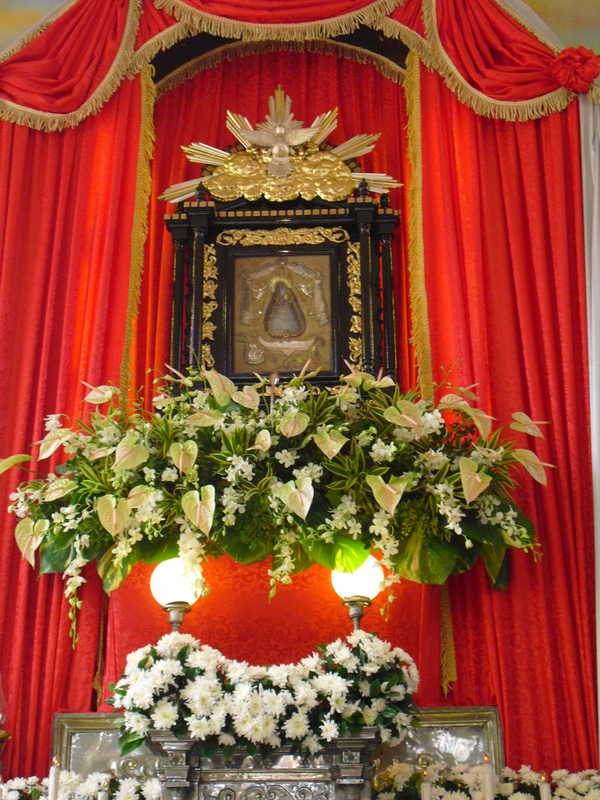 Virgen de la Soledad de MANILA
Venerated in a little chapel a few meters away from CM Recto Ave. in Manila, is another version of the Virgen de la Soledad.  Though not much is known of the icon, many believe that it is one of the many representations of the famous and miraculous Virgin of Porta Vaga in Cavite and that this replica may have been honored in this community since 1884.  According to accounts and stories of old people, the Camba area has been inhabited by mostly residents from Cavite city that’s why it has been called in the older days as Barrio Soledad.

Miracles have also been attributed to this mysterious icon.  It is said that the entire neighborhood where it resides has always been protected from the fires which guttered the Binondo district many times.  The Camba area has always been spared from other kinds of calamities and even the ravages of wars.

Her feastday is celebrated annually every 1st of January through a traslacion going to the Mother Parish of Sto. Niño de Tondo capped by a festive caracol procession going back to its home in Camba St., Manila.* 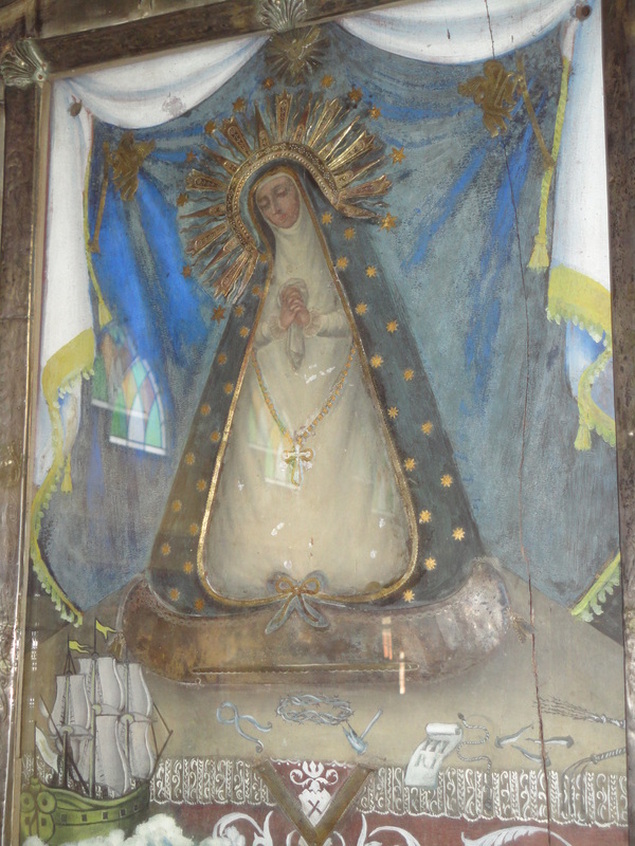 Virgen de la Soledad de NUEVA ECIJA.
A lesser known version of the Soledad is venerated in Nueva Ecija.  In a leaflet written and published by Jaime C. Laya, he narrated that the icon has occupied a niche above a side altar of the town church and that it was honored in a fluvial procession on the Rio Grande de Pampanga.  This tradition was held from the mid-19th century till the 1920’s.  In 1982, the image mysteriously vanished.  It was thought to have been stolen but no police records exist to support this.

Sometime after its disappearance, the image found its way to an antique dealer in Manila and was purchased by a private individual.  Upon hearing rumors of a missing icon venerated in Central Luzon, the buyer confronted the antique shop owner who insisted that it was taken to the shop legitimately.  The owner kept the icon but informed some of his friends (including Mr. Laya) of its story.

In October 2002, Mr. Laya had a business meeting with Arch. Cristina Turalba who mentioned a project in San Isidro.  Remembering the icon, he asked her if she knew anything about the town’s Patron.  Arch. Turalba also researched on the Patron and upon further inquiries, it was confirmed by Mayor Sonia R. Lorenzo that their “Patrona” has been missing.

An old sacristan of the church by the name of Ruperto Flores provided the icon’s description.  He narrated that it was a painting on wood, enclosed in an ornate solid-silver frame.  It is a 19th century work, depicting the grieving Mary—similar to the one honored in Cavite.  Aside from the instruments of torture, the painting is embellished by gold and silver appliqués—the Holy Spirit, angels, Virgin’s golden rostrillo, her cloak with it’s silver lining and metal stars, silver boat-like pillow, a letter “V” and a galleon.

The elaborate silver frame done in baroque, shows ines, leaves and flowers.  Within this frame is a faded, crimson velvet background with silver miniatures of an empty cross, two ladders, nails, and hammer.  Also shown are an angel holding a chalice, Veronica’s veil with 3 faces of Christ, a reed, a man in priestly robes, a spear, a pitcher (Pilate), a rooster and key (St. Peter), a pillar (scourging), a sponge on a pole, and eyes (probably an ex-voto given in thanksgiving for restored sight).

Upon hearing the sacristan’s exact description of the icon, the buyer returned the missing icon to its rightful owner, hoping it will receive better security and care.  After about 20 years, Nuestra Señora de la Soledad is again venerated in San Isidro Labrador church.* 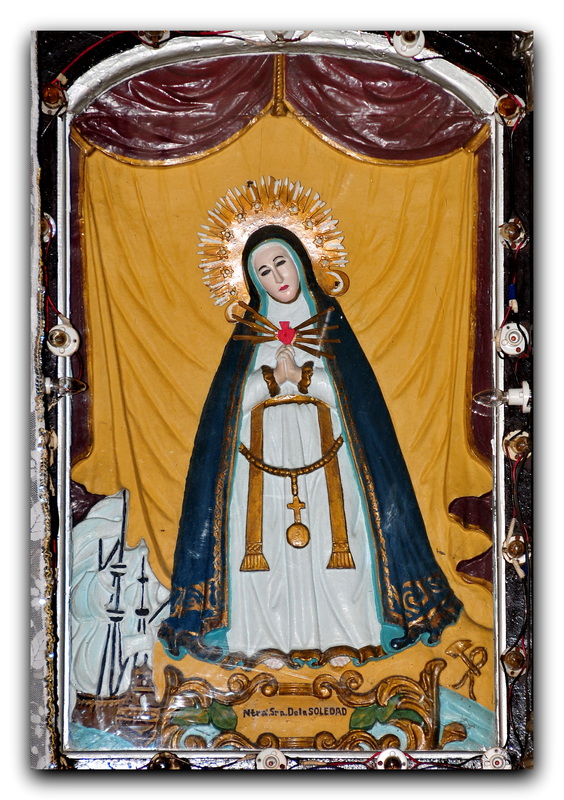 Virgen de la Soledad in Tambo, BUHI, Camarines Sur. Photo courtesy of Glenn Inocencio.
This is one of the three carvings on the calpe tree on the Story of Our Lady of Salvacion. One was of San Antonio de Padua. As the Story goes, it all began on a certain day when Dacoba was clearing the land which he was tilling. He cut a calpe tree, which is good for use as firewood or post. However, he was amazed because despite the many hours that passed by, the tree remained as fresh as it was before; its leaves did not wilt “Milagro!” he said to himself. He informed his landlord about it. That landlord was Don Arcilla who then consulted the pastor of Buhi of what could be done with it. The friar  pastor of Buhi summoned as sculptor named Bagacumba. Out of the tree, he was able to carve three statuettes-Nuestra Señora de Salvacion, San Antonio de Padua, and Nuestra Señora de Soledad—now in Brgy. Joroan of Tiwi, and in the poblacion and Brgy. Tambo both of Buhi, respectively. 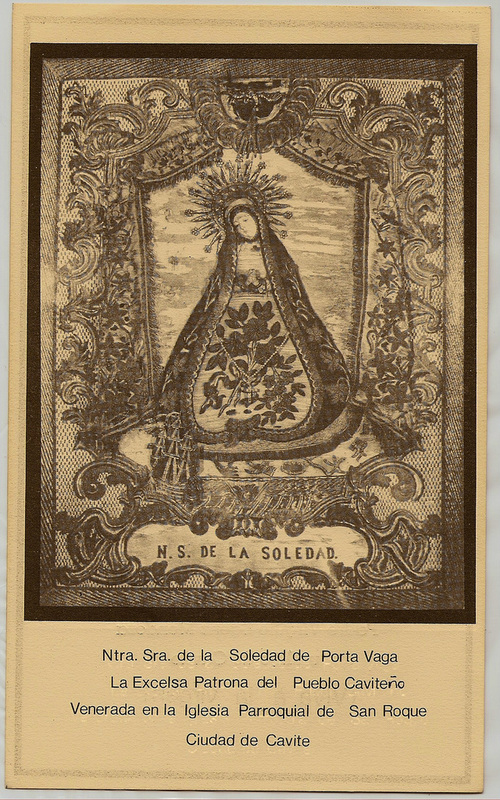